The firm was originally established in February 1907

by local undertakers and cabinetmakers Joe Trappold and Harry Lester. It was first located in Kiewa Street on the current site of the Centro shopping centre until 1909 when it was relocated to Olive Street. It was in early 1909 that the telephone was connected for the first time – the original telephone number was Albury 104. The carpentry side of the business was quite substantial with ledgers showing work carried out for the Albury Club, Arnolds fruiterers, TH Mate & Co, Union Bank as well as many other residential and business clients.

The firm traded as Trappold & Lester until 1926 when, after the death of Joe Trappold, the name was changed to Lester & Son. 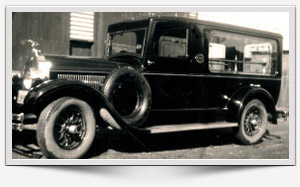 On Harry Lester’s death his wife, Alice and later sons, Bill and Charlie took over the running of the business. The Lester name became synonymous with funeral service in the district and the family became benefactors to its growing town. The Lester family donated the entry gates to the Albury Base Hospital in Wodonga Place in memory of Harry who had been a long time supporter of the hospital. The gates have since been demolished and the plaques have been relocated to the Lester and Son premises in Wantigong Street. The Lesters became heavily involved in community activities including the Albury Town Band, the Albury Football Club, the Ovens & Murray Football League, the Albury Umpires League and Albury Golf Club.

Charlie Lester passed away in 1971 and the business was taken over by Mike and Mary Egan. Mike and Mary successfully operated Lester & Son as well as raising 6 children after moving their family from a dairy farming property in Gippsland, Victoria. Like the Lester family the Egans continued to be heavily involved in the community. Mike has two Paul Harris Fellowship awards from Rotary and was the Number 1 ticket holder of the Albury Football Club for many years, Mary was District President of Inner Wheel and devoted many hours to charity causes.

In 2002, a purpose built funeral home was completed, and the business moved from its central Albury home to North Albury. The building was awarded a NSW housing industry award for best small to medium commercial building in 2003. With their vision for the future now complete Mike and Mary decided to retire and their daughters and sons in law Julie and Darren Eddy and Pauline and Andrew Harbick purchased Lester & Son.  In 2015, a second funeral home was built in Thomas Mitchell Dr, Wodonga allowing the business to continue to grow on both sides of the border.